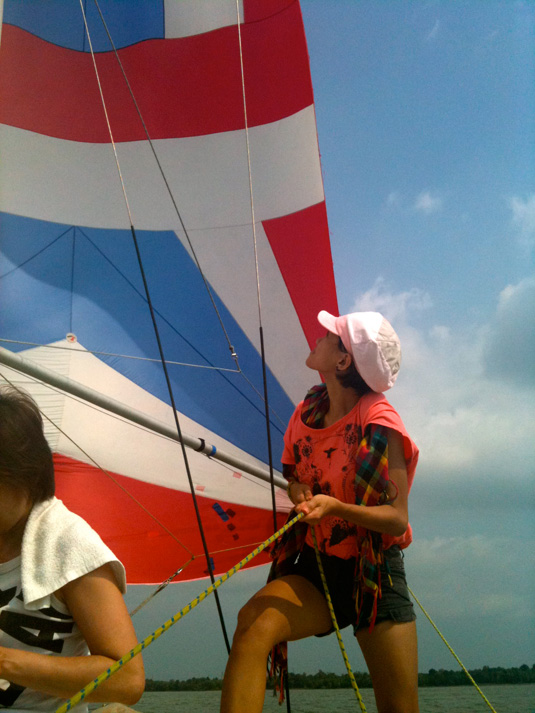 I first met Jothi at Delicious and I know we will be best friends when I saw him take out his Mac Book Air. He was introduced to me as a client by Ringo and he was on my waiting list for a very long time. I am proud to say that he is one of the most invigorating and intelligent person I have ever met in my life.

So one day, he invited me for boat sailing and I was like ok! Sounds fun, isn’t it? I went to his house and he drove a sexy, gritty land rover out and I knew my day is gonna be a blast already! The Land Rover had 10 gears and its damn noisy. There are tons of buttons here and there. It’s so adventurous!! Especially when Jothi told me he used to carry crocodiles at the back of the pickup. Serious Mega Cool ok!

We drove to Port Klang Club and I get to be educated on boats. What I first noticed was the Milo River. -_- The club is packed with people already. Rich Creatures who can afford sailboats as a hobby. fml.

This is how they transport sailboats, its towed on wheels by a stronger car on dry land.

Then I saw the swimming pool. It is green in colour and infested with algae and organism growth. How unappetizing. Bypassed this sight, replayed Fireflies by Owl City in my head and I continued on with the great day. 😀

That’s the harbor with our sailboat (the one with the blue stripe), Bobbi Botok. It means Balding Bobbi. wtf. It’s a sailboat owned by Martin. A sloop to be exact. I do know what a sloop is ok, I played Puzzle Pirates for a while and got used to some sailing terms and what not. Games help, you see.. its not a useless hobby after all.

After breakfast, we made our way down to the boat. That’s Jothi in his sailing gear. I was secretly taking photos when everyone banned the existence of handphones in the boat. I am not guilty cuz its an iPhone, not a handphone. fyl.

A closer view of Bobbi Botok. Its a sloop that can house 7 people, (info from Puzzle Pirates) hehe. No crow’s nest. Light and with 3 sails.

And on that day, there wasn’t much wind. So how to sail?

The dirt rich fuckers, from left : Martin, Jothi and Don. This is the part where the horror sets in, its not a boat sailing day. Its a Boat Sailing RACE. RACE. and I had a pretty imagination of reading books and enjoying the breeze on the sloop in a romantic sunlit background and everyone is drinking champagnes. No, I was wrong. I am supposed to sail as well.

The noobs Esther and I were briefed on the basics in like 4 minutes. I shut off the romantic songs in my head and turned on my adventure mode in me. Getting kinda excited, since the day before they WON the race. Today, we are gonna make it as champions!!! I was so hyped up. Wtf cares bout reading books! Let’s sail a boat!

Here is how it works : the boat moves on engine to the starting point, whistle blows and we sail with sails instead of engine. With no wind, the boat isn’t gonna move very fast and things won’t be as exciting.

It’s all about skills and strength. I looked at my flimsy body and wonder if I could be of any use at all. I dun want to be excess baggage all!!! Then I realized for the first round, all Esther and I have to do is go sit on the right or left side of the boat to balance it. I din do very well, cuz um. I am too light. So I tried to sit as close to the side as possible to contribute.

Ok, the thick stick above Jothi’s head is called the Boo. Because of a simple reason, it will swing left or right (tack or jive) and when it does, it might hit your head with a sound BOO! So everytime the boat tacked or jived, Esther and I go under it to balance the boat on the opposite side.

Ironically, Jothi got hit by the Boo in the head. It really did went Boo! 😀

Then we were taught how to tie knots. This is a Rabbit Knot. Took me damn long to do it. Once I did it, they confiscated my iPhone and I couldn’t take any photos for a long time. We won the first round and during the intermission between the 1st and 2nd round, Esther and I sailed the boat for a bit.

That’s me sailing the Kite. Basically, all I gotta do is let loose from time to time, if the Kite droops I tugged and draw it in to keep the Kite taut. Simple enough and I feel great to be able to actually do something!

Esther sailed the Kite for a bit as well. At this point, I was wondering if I would be invited to go serious in boat sailing with them as a crew. I been sailing in Puzzle Pirates seriously for about a year, this is totally different though. I fell in love with boat sailing already. 🙂

We managed to win the 2nd round as well. All due to Martin’s (on the right) experience and expertise in captain-ing the boat so well. He been sailing for 15 years already! I asked them how much is the sloop, the answer was 30k. Ok what… its a nice hobby. Probably because I am still delusioned by piracy grandeur and swordfighting with grog in the boat. I used to own a cutter in Puzzle Pirates, hehe.

That’s Matt, one of the other guai lous. He was steering and manning the boat’s sails. Basically, without Martin and Matt the race is goners. They are awesomesauce. Well, it’s their boat. 😀

After the race is over, we folded the sails for keeping. It’s damn big and takes 3 people to fold each sail.

At this point, I was so hungry I could eat 3 cows. I was so deflated after tacking and jiving and being hit by the Boo here and there.

Another proud moment of my life, forgot to bring sunglasses.

That’s Don, Jothi and Esther enjoying the breeze of championship. Ok, actually at that time we didn’t know that we have won due to all the handicap calculations for boat types and whatever whatever. It’s just a good feeling after a good sail in the river. 😀

That’s Martin in the boat cleaning up after the race.

Goodbye Kite, it was nice sailing with you!

To my delight, they invited me to be part of the crew! Wee~~ They said I am light enough to man the Kite in front. Cuz I won’t bog down the boat since I am so light. Happies!!! I love sailing. Can’t wait to sail at night and look at stars…

There we won. Prize : Absolut Vodka. 😀 Probably saved as grog for next sail?

Ah, here is Jothi’s blog design that I wrapped just few days ago. This man is seriously impaired. Its exceedingly annoying when someone knows so much. 😀 Ok let’s list.. he is a scientist, cosmetologist, writer, musician(percussionist for Hannah Tan concert ok!!), historian, mathematician. What else? Oh! PHD Professor when he was just 21.
It’s inspiring to be around him, the world is vast and there is interesting people everywhere. 🙂

wah i wanna clit lick u cause u so sexy and all go sailing. hehehe

next time come with me la

dunno jothi wants it like that. though he is mentally 15 years old but biologically he is 51.. wat to do.

What a great resource!