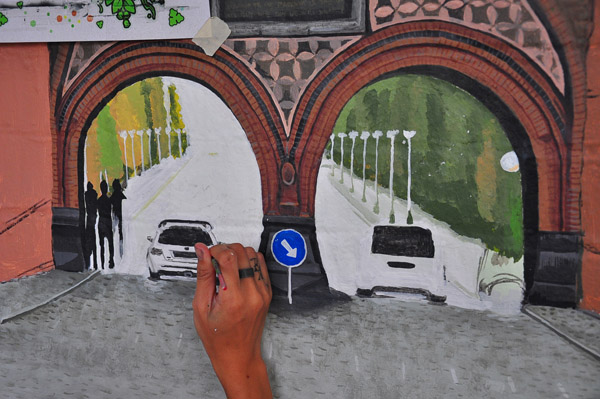 A Satria and Myvi in Copenhagen. Is it possible?

In the end, our cars were so noticable due to my new found knowledge and passion of cars. FOL. Everyone who walked by asked “Eh itu Myvi ke?” Plenty of people gave comments, snide remarks and of course they did not brood very well with our supervisors. Sad to say we have to bade farewell to our cars in Copenhagen. By the way, it is actually possible to get both cars in Copenhagen if they drive the cars from UK.

Goodbye Malaysia Boleh. It's not good enough for Denmark.

So at the very end, I took of the Satria’s wing and extended the lights into the boot. Took away the airflow mesh and change the bodykit abit. Plus made it blue. No Satria is blue. As for Vinn‘s Myvi, it was too boxy to be a sports car or sedan, the only possibility was an old beat up car. Vinn raged when she saw it and tell me to just remove it. Great idea. 🙂

Oh well. At least the Aprilia is still there. Tsk.

The logo plate and create some broken bricks

Before we did the elephants, Vinn did the logo plates and we both messed around with the bricks. It was a difficult task, imagine there is a nice graffiti already and you are supposed to spoil it. I gave up after a while and Vinn completed the task.

Break the bricks. Let us in another world.

While she does the bricks, I completed the buildings. Now there are some windows, doors and things look abit more decent.

To illustrate our cars in Copenhagen is just too cute. Anyways, great work there =)!

Haha thank you. What a bummer seriously

aaargh….should have left the 2 rides there. it was a nice touch to the whole mural. darn those mouths!