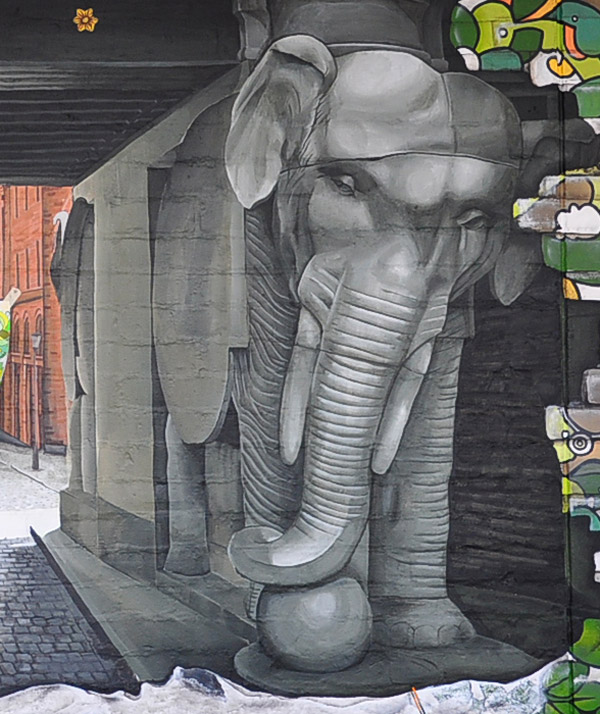 Another ride to Carlsberg. Destroyed my day.

My car’s road tax were overdued. I had to take KY‘s car. It broke down halfway with an unsettling boiling steam sound. FML. I sent to the mechanics and it seems like the coolant leaked cuz it was punctured. I called my dear fiance only to be told that he knew about it and has been managing this problem since forever. I raged at the injustice of mistreating a nice Toyota MR2 and wanted to just drive the car straight to a lamp post when I saw the mechanic start up the engine. The hood was  up and the engine trembled, shuddered and GROWLED into life. Omg it was the most beautiful sight I have ever seen. All my rage dissipated. Sigh.

The night before, Matthew traced the lines for the new wall and started work on it already.

Matthew from The One Academy painting.

He painted the tones for the cart and building. It helped ease our job alot.

Vinn's blending for the elephant head.

Meanwhile we did the elephants. Vinn started blending the elephant’s head. Since she had been blending from the beginning with the stones, pillars and bricks she had no problem getting started.

No big brush? I can fix that!

Ok I am not as lucky, I have been using leftover brushes from the Family’s Day. It’s not the tools its the skills as they say. wtf. Yeh I need a big brush and all I can do is masking tape 3 of them together. Turns out it became one of my favourite brush. I can rotate it to do the thin lines. Cool.

My attempt at doing the head.

I however, had trouble since I was doing textures and details right from the beginning. My brushes were never bigger than my finger since I only need to do details. Now I had no brush and no experience doing the blending. FML.

I just want to finish, go home and do some coding.

Somehow I managed to get a hang of it in the middle. Doing that and matching each other’s painting style is difficult enough.

Finally, we are painting without bumping heads. But we are still spilling water and paint.

In between elephants, we did the carlsberg logo plate and also the City of Carlsberg typography only to have them badly misaligned. No can do. Perfection is what we want to have.

After half a day, we decided to maximise our potential on the stuff that we are good at. I started doing the details for Vinn‘s elephant body  and pillars..

Vinn helped me out by doing the blending for the pillars behind my elephant.

Meanwhile, I was sick of doing blending and I had already finished my elephant other than the body. Vinn helped me out by blending the rest of the pillars and body.

Our elephants. Lacking some trunk and some details.

At the end of the day, our trick paid off. All that is left is for Vinn to do the elephant’s trunk and for me to do my own elephant body’s details. Phew.

Wow you two can match each other’s style very well! Haze’s side seems to have a higher contrast though.

Hahahaha ya. This is called “ego precedes all”. Both of us can only compromise so much. Matching each others style to us is like downgrading quality to math. :p

U give la money