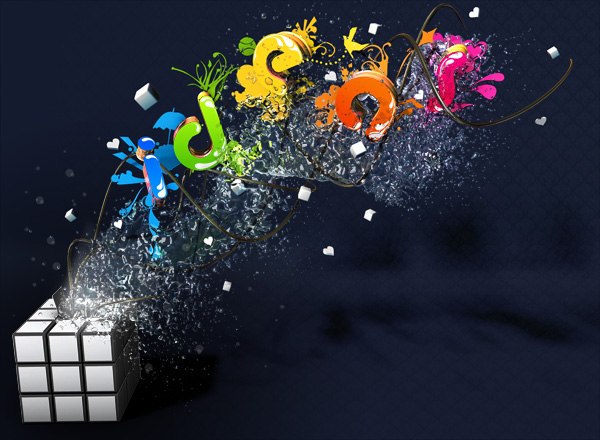 Dell Design Studio : Make it Yours!

Happies** Do you know why I love design so much? It is because of the fact that when I can foresee my end result being so awesomesauce and that causes my heart to go into an adrenaline rush until I finish my work. I haven’t felt like this for a long time!

Thank god for Dell, they have this new line of laptops called Design Studio Laptop (sounds so me!!) which is delightfully affordable and compact! I am looking at the 16″ one, the monster out of the Design Studio family. It comes with Windows 7 and 3gb RAM. 3gb and its DDR3 too. Hmm, for those who don’t understand computer jargons, RAM is like a short-term memory storage of a human. The bigger it is, the more it can store, the faster your computer can multitask. Then, there is the hard disk space which is like a space for keeping objects and files. The Design Studio comes with 320 gb hard disk space, that’s equivalent to roughly 450 copies of 700mb movies. 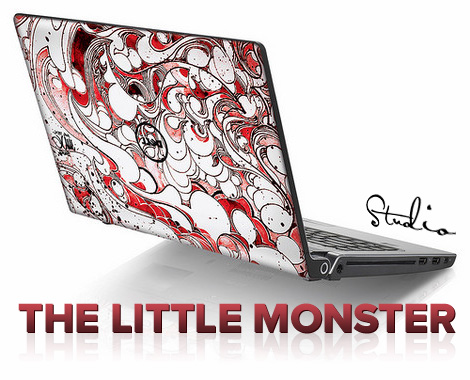 The little things that made this laptop so amazing is the 3 usb-ports, backlit keyboard, Blu-ray DVD drive and a hdmi outlet. Wee~~ hdmi display!!! Bye bye DVI cable, hello HDMI! Eventhough the monitor is a bit too small for me, having it in hdmi makes a big difference. The original comes in 15.6″ but the bigger the better so 16″ for me. It’s really, really difficult to work with anything smaller than that when I have browsers, coders, design apps, entertainment and chat on all at once.

For RM 3,999 the price is too cheap for all the goodies that come with it. If you had a Dell machine repaired before, you will have already learned that you are just a phone call away for the technician to come to your doorstep and fix your machine for you. I am quite impressed with their service actually (beats waiting 100 years at LowYat for the people to fix. -_-).

The best part though, is the fact that I can win this!!! And the best-er part is the competition is a Design competition!!!
Needless to say, I am extremely excited about this contest because there are 2 prizes!

Best Entry : Dell Studio 15″ Laptop with your own laptop skin design worth RM 3,500 + Warranty + onSite support + RM5000 in cash.
The winner for this category will be decided by a panel of judges.

Most Popular Entry : RM2,500 cash voucher for a leading department store.
The contestant with the most votes wins this.

However, you can’t win both. In the event of you winning both categories, the Most Popular Entry prize will be awarded to the person who got the second highest number of votes.

Anyway, the size of the artwork has to be 6180px x 4535px at 360 ppi. That is freaking huge, I did a 10 feet by 6 feet banner and the file size was smaller than this. I took ages to finish my design. Anyway, ppi means pixels per inch. The more pixels per inch, the sharper the printing. 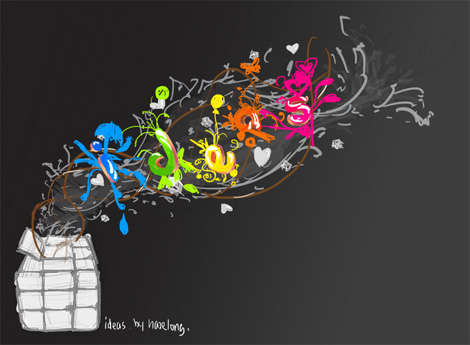 Hah! Bet no one used 3D for their design! I happily sketched my idea down in photoshop and start up Maya.

/*Warning, Massive 3D jargons ahead, you can skip it but that’s like half the post and my sanity…You can click on the links below which offer explanation on a certain jargon.*/ 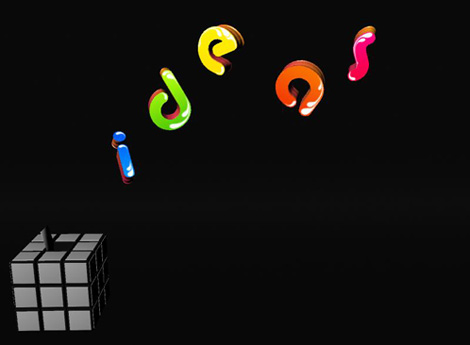 [2] I realized I’ve forgotten how to use RealFlow for liquid simulation!! What kinda kopi first class honors degree in “Film & Animation” do I have? fml.
So fine, I did the liquid with Maya. The threshold is still not perfect, the water looks abit too ‘sandy’ and pehchah-belah.

[special] Occlusion pass – rendered in 6 hours
The liquid wouldn’t render in occlusion. This deserve a special tag cuz it took freaking 6 hours to render every pixel of 6180x4535px resolution. 3D is one subject where the computer does the work and there is nothing you can do to rush it when you want good quality.

[special] Fake Occlusion pass of the water – rendered in 9 hours
I started to break everything down into passes in order to render everything. The occlusion for the water cheat one, I make using lambert and spotlights one. I am proud of it though, it looks like occlusion!! 😀

[3] After that, I couldn’t figure out why my brown line’s nurbs curves were jagged after rendering (supposed to add isoparms). This is a render of all the objects in the scene before I start lighting them up. //Enough, I want to skip this!

[4] Diffuse Pass
After rendering a total of 11 passes in 36 hours, I opened up Photoshop to composite. This is the first pass with 2 spotlights without any specular highlights. The fonts are brighter cuz they are surface shaders.

[5] HDR Pass
I threw another pass which was rendered using a HDR as the lights for the scene. The HDR was yellow casted and made my cube a bit reddish.

[7] The cube was too 3d-ish and not realistic enough for me so I re-composited it using the cube’s occlusion as the base.

[8] Then I overlay the previous cube’s diffuse pass over it. The result looks better already. //Enough, I want to skip this!

[9] Reflection pass
I love love love rendering reflection passes, they are easy to render and gives a pop to the final composite. Don’t ask me what is a pop, I don’t comprehend how my brain works either. Now the black lines and the sides of the font have a nice reflection to it.

[11] Global Illumination Pass
Final touch ups left, I added a glow to the cube opening and some bokeh sparkles around that area. Then I overlay the GI pass which added some reflections of the fonts’ colours onto the cube and water.

So, this is the final laptop skin. Am I tired? Yes. Am I hungry? Yes. Is my head swinging? Yes. But oh-so-definitely worth it. 😀 I’m one step closer to winning the laptop after 12 hours, what bout you?

Please donate some votes to my design and my lack of nutrition+sleep+sanity persona while doing this!

Remember to join the contest! Leave a comment here if you do so I can vote for you!

This is AWESOMESAUCE!!! O_O

Really like your design!!!
Hope you’ll win the laptop. 😀

if i win i’ll get u that camera if the “leading department store” got sell cameras, then can use the cash voucher for it 😀 make ur dream come true.

purdy! i totally forgot my 3D already, haven’t use them since I finish off that 3D class

yala. u know la how difficult it is.. damn crazies one.

lol, but well worth the effort la!

your design is cool!
i thought of joining, but i’ll never be as creative as many others when it comes to designing.. =P

you’ll definitely get more votes than i did lol.. let me know if you submitted, i’ll vote for you.. 😀

It is a very & so nice this is awesome for all of just one thing say is nice .