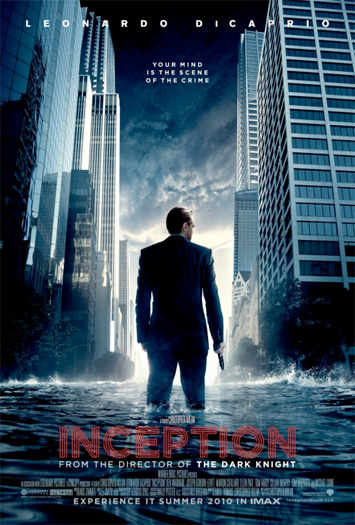 I have always been an avid follower of Christopher Nolan‘s movies, from Memento–Insomnia–Prestige–Batman movies and finally, Inception.

I think this is his masterpiece to date. Eventhough I don’t really like Leonardo DiCaprio, he fit into the character like a glove. Gordon-Levitt did an amazing job too. And the usual suspect, Michael Caine is of course casted again.

The soundtrack is similar to the Nolan’s Batman franchise. Composed by Hans Zimmer once again. In the Batman movies, they searched high and low for a sound that could properly define the mood of the Joker and the darkness of the setting. After weeks and weeks of testing instruments, scores they resorted to the library of single tones. And they settled just on one note. A one key tone, made by a cello. The end-result was epic and raised goosebumps in me everytime I watch the trailer again and again.

As for the plot, I don’t think I should spoil it. But Chris took a concept, built a world around it placed characters in it and too the concept a few levels beyond the initial one, making it intelligent and strangely easy to understand. For that amount of deep sci-fi concept to be conveyed together with drama, complications, actions and climax in just 2 and a half hours is just pure genius of him.

Beware however, that the climax start early and drag all the way to the end. The suspense was so heavy to the point I actually notice the sound effects. (Good sfx are meant to be unnoticeable, once you start noticing the volume, the song, the crashes.. it means something gone wrong somewhere in the audio editing session.) This time however, the sfx were noticeable due to the lengthy climax.

This is the kind of movie you can never forget in time. Pun unintended. 🙂

Thanks nuffnang for the tix 🙂

ouh, i just saw this yesterday and i’m still working on the review. it always take me like hours and hours of research and thoughts to write a proper review, and i want to do it justice 🙂

nolan is a visionary! he’s one of the few directors that have never directed a crappy movie yet (and even spielberg, kubrick and scorcese have done duds before)

I agree with you. Not one bad one. But I have to say I wasn’t very impressed with insomnia though. Despite the director and the strong cast.

Have to agree this is an awesome movie done by Nolan. PAiseh to say, my mind can’t digest the whole movie nicely and I’m thinking to go watch it again lol and my boyfriend said that I’m dumb (jokingly la~) LOL!

I din’t see you though~