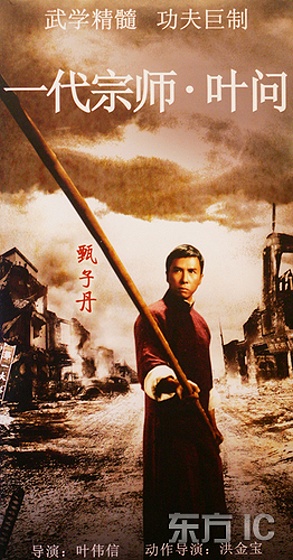 I will start with 3 words :
EPIC
FINEST
DONNIE YEN

You will be disappointed if you are expecting to be disappointed.
This movie kicks .. correction.. Donnie Yen kicks 14 colours of asses in this movie.

It is impossible to be disappointed.
The awesome-st thing is, there were 2 malay dudes sitting next to me.. and they were watching it for the SECOND time, and they were repeating the dialogues.

There is no Bruce Lee character in this movie. period.
I am glad there isn’t.

Synopsis
The movie is about a man, Ip Man who practices Wing Chun style of Kung Fu, spanned across the World War era during the Japanese Occupation and of course, the ending showed proof of the real Ip Man posing together with his student, Bruce Lee in a photograph.

Cinematography
Nothing to Huha about.. nothing great.. the film grain was too obvious for me in the beginning but I got used to that. The lighting and composition of shots are gritty, some scenes looks tiny bit staged but the colours are subdued, so are the white references.
In fact, (kill me) Kinta : Malaysia’s first martial art movie’s cinematography wowed me. (Only the cinematography.. nothing else)

Other than that, the cinematography served its purpose in this movie.. to show the greatness of the action and martial art scenes. 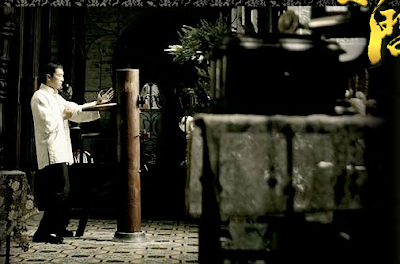 Editing
The editing was good, well paced and the title scenes in between the 3 acts were well timed. In fact if the first act is gone, the movie would not leave a lasting impression on the audience as it practically sits us down on a rollercoaster ride of emotions throughout the entire movie. 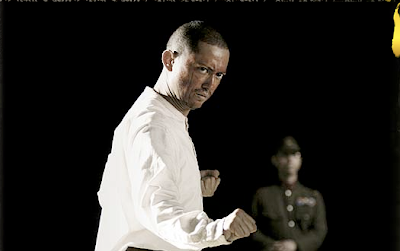 Acting
Donnie Yen’s part below.
Simon Yam did a good job for his supporting role and Hiroyuki Ikeuchi was brilliant as the villain. Ikeuchi(above) also played a character in the GTO drama if you recall.. hehe. He was the dude whose Onizuka always tried to seduce his mom? Then Onizuka ended up saving her and the dude and him became best fags and voyeur buddies.
The other minor roles serves only the purpose of setting the mood and driving the plot forward for the movie.

The comedic elements for this movie is well timed and the theater was practically booming with laughter, especially in the 1st act. I have never enjoyed myself so thoroughly through out a Chinese Martial Arts flick before.. don’t even mention or compare Jackie Chan cuz Jackie Chan is well.. Jackie Chan. Everything he touches has the same personality. Will go into that below..

The 2nd and 3rd act was intense, a mixture of vengeance and touching scenes which will not disappoint the audience as there are more than 1 villain (more fight scenes, more Donnie Yen woohoo!!) 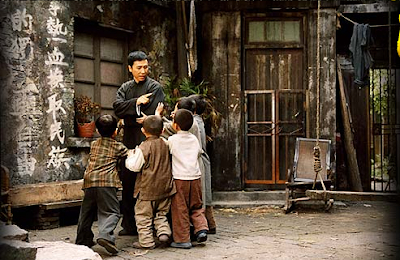 Sound Effects
No fake or overloud wee-wung-wung and banging this time!!!
Weee~~!!
They are well timed and normalized to the pressure of each punch, swing, flick and hum of a sword. The only flaw I notice is the transition between each scene, the sound does not seamlessly flow into another but was rather cut off and cut back in quite suddenly at a difference of a few 10 seconds compared to the image. 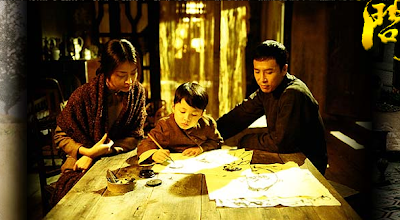 Donnie Yen played a character in Wing Chun, the old movie starring Michelle Yeoh and him.. so this is not his first venture into this martial art.
Wing Chun is something like a form of transfering energy, using ur enemy’s strength against them and gauging the range of their attack.. then avoiding them.
Something like that.. its hard for me to explain here.. LOL

Donnie Yen VS Jackie Chan VS Jet Li
First of all..I love Jackie Chan.. we all love him but Jackie Chan is always the same. He only plays the protagonist and never the villain, his reason being,“I want to be a good example for all the kids to look up to, so I’ll never be the villain.”

Every character he touches become his. Humourous, stumbling, accidental-kungfu that somehow kick ass. Always happy go lucky (except for New Police Story and Rob-b Hood.. and a few others.. he diversify his characters more in those movies). So acting wise, we all know… he will always be. him.

I never ever watch his movie for the sake of the movie itself. I watch them cuz it’s well you know.. Jackie Chan. and his recent endeavours.. Forbidden Kingfail was a domfail and all his US movies.. other than Rush Hour… others was simply.. forgettable AND I WATCHED EVERY FREAKING ONE OF THEM!

But we all know that Jackie Chan is the benchmark to hit if you want to be a martial arts action star.

Jet Li is cute. I like his movies.. it was nothing too king-awesome though.. His US movies were um.. not that well received by public but I actually prefer him to Jackie Chan cuz he is more versatile since he plays villains, heroes and a whole bunch of other characters as well.

If you notice, all his US movies his screentime has very little dialogue and alot of fighting and also, very little acting.
That is because well.. he can’t really act that well. He is ok.

When he did Unleashed.. with Morgan Freeman, he took extra acting classes cuz he was playing this character who has been living like a slave that has never been exposed to normal human life.

His acting like, went up freaking 5 notch in this movie.
He was good.. damn good.

I swear upon Kingdom that I will forbid any Jackie Chan and Jet Li American produced movies.
what the fuck were they thinking [full stop] 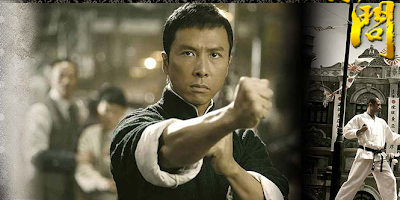 Ok… I wonder if yall have watched Twins Effects.. the one where Jackie Chan was like the immortal guardian something.. then Donnie Yen came.. and fought him.. then the match was a draw (HINT 1).
After that they had a dialogue, Jackie Chan was figuratively implying that he is ‘passing the baton’ to Donnie. (HINT 2)

I was thinking figuratively out of the movie-in the movie Jackie is saying that Donnie is gonna step up and he is stepping down as the leading martial arts action star.

Wonder if I am being too figurative.. HAHA.

In Ip man, Donnie was mediocre in his acting. He pulled off all the scenes well but there is no Oscar to shout about. Well, neither did Jackie or Jet Li.
His choice of characters is diversified as well, antagonist.. protagonist.. everything. He is hard ass.

All the fight scenes will wow away all the Jackie Chans and Jet Lis out of your head. You will forget all about their movies and in your dictionary, right next to the word kungfu you will practically see Donnie Yen’s name right next to it.

After you watched this movie, you will know. He is stepping up and his action scenes may not be as catchy and humourous like Jackie.. he certainly does have his own style.
I am really so hyped about this movie now.
serious.

We shall wait with great anticipation on his choices of movies and characters from now on, it will be interesting to see how he will grow as an actor and as a martial arts action star.

I love this movie very much too! *GAAAAHH*

Yeah you’re right! Donnie Yen just has his own style, which I think it perfectly blends into this movie!

I didn’t notice too much about the other parts, but what I like about its cinematography is that the color tone, it gives out a nostalgia feel! Like back to when we were kids and those type of movies, the ‘desaturated’ tone really works. Secondly, I really like the scene of the streets! It looks realistic and crowded with sign boards and good enough to not look like any scene from the standard HK dramas street scene… which looks really man-made.

But the actions are wow, I didn’t really watch too much of martial arts movies (besides Jet Li and Jackie Chan), but I think this one’s good because the action is acceptable, nothing too fancy or ‘terlampau’ impossible or overdone, which is the thing I like most.

Lastly, the jokes are good. Especially when the son comes out on his tricycle and passes his dad a message! XD That part is just sooo cute!

Lastly, it’s the English title of the movie. I really thought it was called ‘IP Man’ when I watched the beginning of the trailer, somebody told me there’s a China Kung Fu superhero movie, which is ‘IP Man’, like batman, spiderman, and now IP man, LOL. Oh then only I know it’s ‘Yip Mun’. Heh. XD

Eh yalor. at first when the movie came out i dunno how to tell people cuz i dun dare to pronounce the title Ip Man.. I scared I say wrongly..
HAHA

uhm…i dont think u all really know about ip man…the way donnie yen acted is portraying how ip man (who is still alive till today) characters are…if u know more about ip man…and his history..i bet if u r a chinese, u will know how much the meaning of this movie is to the chinese…no offense but just to say that dont judge by the quality of the movie but judge by the originality and the theme…
fyi, The main and sub actors here are mostly from martial arts background…donnie yen didnt know how wing chun should looks like but due to this movie he learn it. of course, it will have to take years to master it..
Thus, this is based on true story and that this movie is gonna make us aware,realise and reminisce so much history of the legendary martial art master-IP MAN

um… dude.. I AM CHINESE.
and btw, if you want to post spoilers.. please tag them like li wen… movie reviews does not contain spoilers.. which is why I did not mention any plot..

Eh I didn’t watch Kinta! Wanted to watch but didn’t heard much reviews and comments about it. o_O

It is offensive when you are trying to judge what we don’t know simply because we did not mention about it.

I did not mention anything about the content or the history of this great hero, does it mean that I don’t know him and I don’t experience the meaning that you claimed that a Chinese would feel what he should feel from this movie?

It involves a lot of things to make a movie good. Yes part of it is the content, and yes, part of it is also the technical parts.

You can always add in that we did not mention anything about the content or the meaning, and of course you can share with what you know or feel with us. Thanks for sharing too, but I hope you can skip the judging part on us, which is the main part that makes you sound unfriendly.

It’s like we didn’t go on and judge you and tell you that you do not know anything about filming and movie-making :p