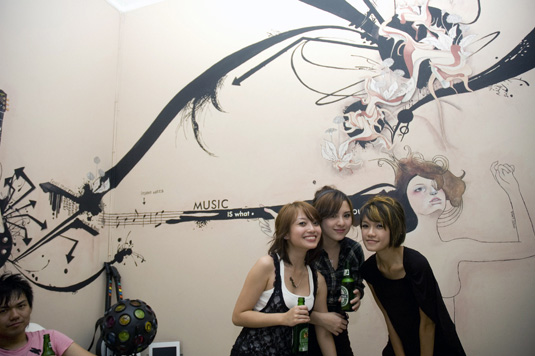 So I am the last person on Planet Blog to blog about this. I deserve some trophy of some kind.

By the time I wrote this, I saw this photo of mine appearing in all the blogs that posted about the party. -_-

Yes I know someone is holding rubbish-bag coloured Asam Laksa and I was massive enough to pose with my hand. Forgot to align my facial expression though.

Heineken sponsored the Xmas party and they gave posters, beer, decorations and party gifts. Look at the level of detail! They even provided Heineken slippers for KY‘s worm-infested toilet. I know got worms cuz I painted his wall 2 days 3 nights there ok! Heineken peepz probably went to the toilet and felt the worms tickling his feet last last year. This year, he wore slippers and accidentally left it there.

The liquor were plentiful, needless to say. Chris Tock posed with the Zhu Guo Liang after drinking it and his chinese soul left him when he sat down. I think he didn’t have any english soul.  (shouldn’t have took that photo, can’t help it fhl! )

Kim excitedly fed Wei Yi liquor through the hose as mastermind, Terence looks on. Don’t try this k, it’s not a very fool-proof way of making sure you drink as fast as gravity makes the alcohol falls down your throat. I saw a few vomit and splurt but I am imagining things like alcohol spurting out of my nose when I do it. -_-

Capsicum hats provided by Heineken were essential accessories that night especially for those who broke the rules of the party by showing up without anything green on their body. There were even glasses which Michael wore. Elaine‘s cap matches nicely with her top, beer bottle and green nails. Green nails! The effort. ugh. This will be the last photo of Kim as she kept untagging herself in my Facebook’s album. Must every photo be model shots!! Women. Yala, I know I am the same also. :p

Which is why this will be the only photo with me in it. That’s the wall! *excited* I paint one!! I climb ladder all, so tall all! I balance with leg only while my hands hold paints, brushes and sponges. At the end of the project, I can tiptoe on the highest railing. Step. Floor. Whatever la. I got some cun chicks to pose with me. Those two, Audrey and Suet Li, match my height nicely. *evil*

Disco lights on the wall. There were 3 questions that I have been bombarded with that night that stunned me each time. I didn’t know how to answer them. After searching through my system files, I found the answers.
1. Why only one boob?
She is right-handed. She over-used her muscles in her right hand to hold up the guitar, so her right chest’s muscles were so neglected, it shrank to oblivion.

2. Why no nipple?
It would be damn wrong if I were painting an erected nipple, probably with hair, when someone in the house walks past me and watches me paint.

I saw Su Ann there! Su Ann was my junior from high school and she don’t really remember me. She probably cannot recognize me from the banner. 🙁 I was also hideous looking back then. I used to think that uncombed hair, untied shoelaces and untucked shirt were cool.

Ky, Elfie and Nazrul. I wore slippers to the party cuz being the genius that I am, I foresaw the high frequency of taking off and putting on of shoes at the party. It was the Roxy slippers that Pearl bought for me from Bangkok. Elfie saw them and went, “NOOOOOOOO!! Take them off! Those are my competitor’s slippers!!”

It appears that anything else other than RipCurl’s slippers hurt her eyes. So I changed into my heels which caused me to spend longer minutes either indoors or outdoors. I actually enjoy spending time with people who are forthcoming with their opinions, because then I don’t have to withhold myself from speaking out my bimbotic or geeky thoughts aloud.

The Game
Bring an Xmas pressie and wrap it up with your name clearly written on it. Everybody will take turns picking one present. When your turn comes, you can either take from the pile or take an already opened pressie belonging to someone else. The someone else needs to re-take their pressie then.

You have to hold on to your pressie no matter how much you want it. You can only hope for someone else to take your pressie and then you can choose another one!

However, if you get a pressie that you really really like, for example a Banana Republic cocktail shaker, rest assured that your pressie will soon be snatched by someone else. For evidence, look at the hands and pointing fingers when KY hijacked the cocktail shaker.

If you opened a present that you really hated, the best you can do is to lelong it to someone else and hope that they will take your present. Michael didn’t have much luck hardselling his Gilette shaver though.

The Curious Case of the Black Cube
I’ve gotten into the hobby of cubing recently when I was at the Nuffnang Blogger Awards in Singapore. I’ll dedicate that story in another post with fresh space and fonts. I brought my cube to the party and Ruby saw me solving it and started to get interested.

During the game, I was happily holding onto my cocktail shaker present when Timothy opened his present : an irregular sized Black Cube.

Despite the CEO of Nuffnang opening the present, despite not knowing 80% of the people there, despite the fact that I was a nobody at the moment – I sped through 4 stages of excitement : disbelief – bimboness – shocked – big cheshire grin. I screamed like a Cheras-bred woman.

I QUICKLY composed my soundtrack of victory in my head as someone took my present and I took the cube. Sadly, it was shortly taken away from me. I ended up with Asam Laksa (the fehmes photo on top) and even a yellow colour monster (dunno what that is).
After many conspiracies and evil schemes, a requiem of pubic bitter remorse was blaring in my head. Since I only want the cube and there was nothing I could do about it, I decided to help others instead. Gareth and Kim’s ba-qua got hijacked so I took it for them.

As I was walking to pass them the ba-qua, Yee Hou offered the cube to me but my Cheras persona already left my body so I rejected him semi-courteously. I forgotten that Gareth will give me something in return for the ba-qua. He gave me the Warcraft and in 3 seconds, I came up with the grand evil plan.

damn complicated ok all the gift exchange sialll, but it was awesomesauce!

YOU MAKE ONE THE RULES!

hahaha u dont take bad pics of me i won’t untag la! 😉 wtf this is long!

OMGGGG THAT PHOTO IS REALLY FML MAN! Haha glad to see you there 😀

I haven’t call your friend Franz… my phone halfway deported from Digi to Maxis.. fml

Today is my lucky day 🙂
Apple is giving review copies of iPad to 100 lucky person. Go to http://bit.ly/d9QOON and apply for it.