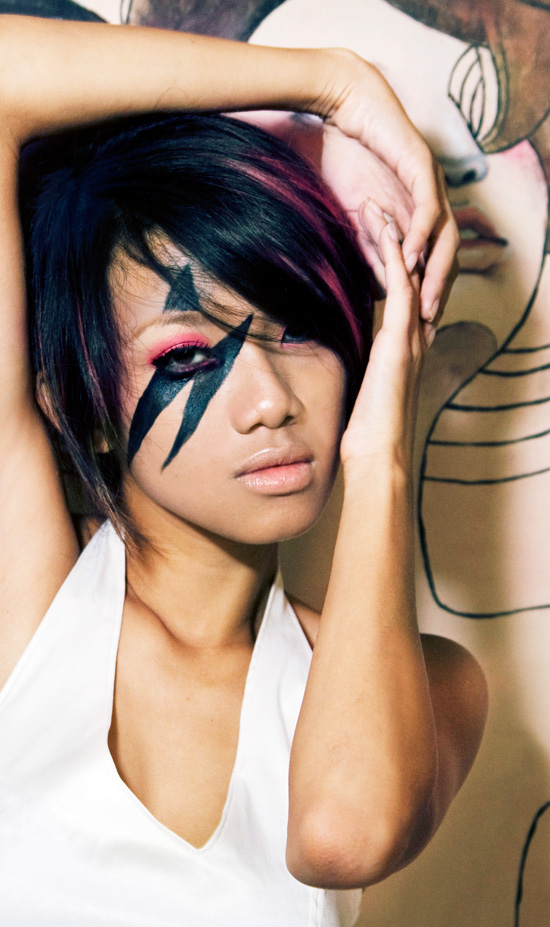 I’ve always wanted to do the Lady Gaga look since like forever but didn’t have the opportunity or effort to do so. Now I can!!

This photoshoot is done by KY at his (our) place. I finally get to do my post-photoshoot for the wall painting I did for him few months back. I made full use of my privileges as his girlfriend and got him to be my cameraman. 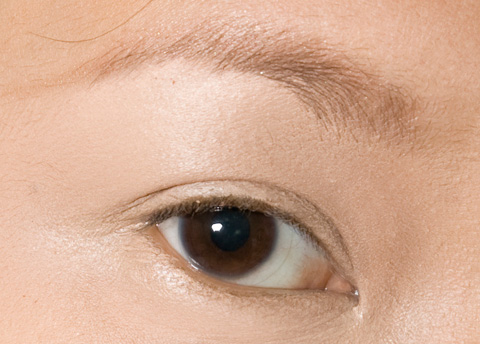 This tutorial is done using the 120 pro pallete. Refer here for the swatches. 🙂 First use shade 54 for the eyebrows, the brows should be as light as possible. If you have dark eyebrows, it is a good idea to apply some concealer onto it first.

Then for the browbone, use shade 52 to get the highlights out to further define the arch of your eyebrows.

After that, I used some eyelid tape and stuck it on my eyelids for a deeper crease. This step is for people who has shallow eyelids, putting on the eyelid tapes makes the colour more prominent.

For this shade, I used shade 38 and a lil of shade 45. To get the colour to be as strong as possible, dab instead of brushing across your skin. If you didn’t have concealer applied as the base, you might want to consider wetting your brush before application. The water will make the colour stand out more.

After that, line your eyes with liquid eyeliner.

Then draw a lightning bolt shape on your face using the liquid eyeliner like so.

After that, instead of using a liquid eyeliner pen, use gel eyeliner instead with a brush and fill in the shape. Avoid the inner corner of the eyes. Pat it with tissue paper and let it dry before reapplying a few more layers. After applying the gel liner, touch up the pink shake in the inner corner of the eyes. Remember to seal it in with the tissue paper each time or you will end up looking like this:

I actually didn’t let it dry and during the photoshoot I keep smudging it accidentally cuz I was rearranging my hair and shit. Then my face became comot and I end up using concealer to patch up the makeup. FML.

Anyway, after that apply mascara and false lashes.

Line your lips with concealer and dab abit of concealer with your fingertip. Use your finger to smudge the concearler across your lips and seal them with lip gloss.

After that, you are good to go! Pink highlights in the hair help too. And that’s the wall. FInally!!

In the middle of my bitching during the photoshoot, we started arguing and laughing at the same time. Then I learnt never to incur the wrath of my jantan cuz he will shoot me at high shutter speed by clicking furiously to catch me off guard. T_T All the time somore. Funny how when the chemistry works, arguments is amusing to the point where both can’t make a point without being able to keeping a straight emo face. :p

The good thing is, during those quick succession of shots all the improv poses I did turned out well. Happies. Slightly more motivated to do more photoshoots for blushberry nao!!

The shots were done with just one strobe of light and some sunlight from the window. I think I actually like doing celebrity looks… any requests? You can actually  comment with an attachment of the photo that you like by registering first. 🙂

I shall make a point to update my blog every 3 times a week from nao on!

waaa my gf is hot max!

lets do more photoshop everything all, I shall upgrade my portrait photography skills!

and I shall upgrade my posing skills all!! Clash our logics together. weee~~~

Everyone is crazy over Gaga’s look. Hehe

If I had a blue wig I woulda done Katy Perry.

Wow nice one !!! If can get blonde wig, that would be perfect~ 😆

ok this is so off topic but i just got engaged wtf. T_T shock max.

you know what? me too!
yey to us everything all
love max mwah!

you know what? me too!
yey to us everything all
love max mwah!

yey to replying twice issit. I shall not remove it. bahaha.

she is iconic. i love her max!

You do the Gaga look better than Lady Gaga!

Totally awesome on you!

great submit, very informative. I ponder why the other experts of this sector do not realize this. You must continue your writing. I’m sure, you’ve a huge readers’ base already!

Thanks for the auspicious writeup. It in truth was a leisure account it. Look advanced to far brought agreeable from you! However, how could we keep up a correspondence?

Um it’s not the “lady gaga” look. david bowie did it first duh

Go tell all the make up artists that are making similar tutorials like this. And why don’t you correct Elton John on his lyrics in Candle in the Wind (england’s rose vs norma jean) while you are at it? Chill n don’t be so specific. We just wanna have fun.