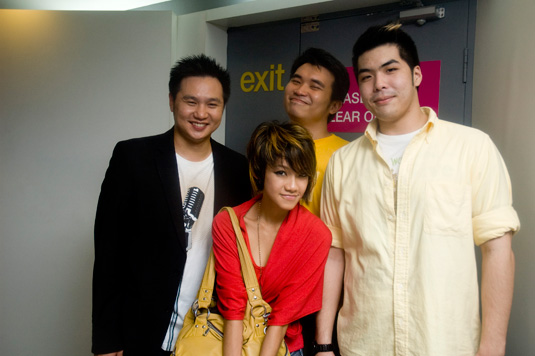 The previous Saturday, I went to the 2nd edition of the MACC stand up comedy at PJLA. I would have totally missed it if Jen Han didn’t ask me for some advice regarding their poster design. -_- I am so out of the public eye.

I took for granted the fact that I did PJLA‘s web design (which I feel it sucked right nao. I need to rework it!!), thinking that I will be able to get tickets at any time I want. In the end, we went there paying a lot more cuz we were late-bookers. Luckily though, we managed to get tickets thanks to Ashley!

” If women are the driver for the Malaysian F1 team, we would definitely win! Why? Women do not reverse their cars, in F1 the car cannot reverse! They just have to step on the accelerator!
They do not have to turn on their signals cuz there isn’t any! And they do not bother to service their cars, in F1 there will be someone telling them to go to the pit to change their tires. “

The show was awesomesauce!! I didn’t really like Chi Ho’s performance as he pauses very often which sorta breaks the momentum of his stand up but I guess that’s a trait that all politicians have. They pause and think for so long as if they need to ponder for the universe and Pandorum when they speak their next line!! Well, who ask Chi Ho to change his profession from a politician to a comedian??

“Chinese people have this word where they can use it to apply to any situation, called “Got Meh?” “Got Meh?” simply means Are-You-Completely-Sure-Of-What-You-Just-Said?
Take a table of 4 people, one of them said,”Eh! This Char Keoy Teow smelly one!”
One of them would say,”Got Meh? Let me try!… nom nom Eh yea!! Smelly!! You try!” He passes to the next one.
“Got Meh? Let me try!”
By the time the Char Keoy Teow reaches the original owner, it is empty! Is it really that difficult to just believe that the Char Keoy Teow is smelly?!! Why must try!

As usual, I am a die-hard fan of JenHan, he improved so much since I first saw him perform (his belly gotten bigger too). :p And to think that he is a few years younger than me!! Die you overachiever.

“The phrase ‘Malaysia Boleh!’ actually comes from us, Chinese. We are always known to say this : “If he can, why I cannot?” That is what “Malaysia Boleh!” means.

Imagine the rest of the content. So political I don’t wanna pull an If-Douglas-can, why-I-cannot? here. Far far.

However, I was surprised at the extensive duration of Douglas’s stand up. Guess this is what happens when you are a seasoned entertainer with experience and reputation to boot! I couldn’t take any photos or video during the standup cuz they don’t allow us to. Why. why.

Ok pardon my re-enactment of the standup, obviously I cannot remember exactly what they said, what actions they did. It’s roughly like that la.

Here I am with the 3 stooges. Padahal Jenhan youngest, he pose like this make himself look damn mature.

Please go to more stand up comedies!!! They are awesomesauce!!!!!!

OMG!!! i so wanted to go but i’m based in kedah now 😥 tried asking doughlas to make a trip 2 penang or ipoh but it seems his manager scared tak laku :sigh: