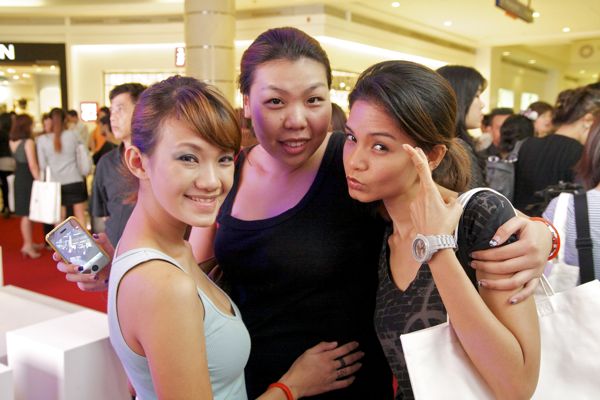 Last week I was at Uniqlo’s launch at KLCC. So lucky!! I wasn’t really expecting much from this event but I was delighted when there is a huge line up of celebrities ready to model the apparel from the popular brand.

Utt from MTV is here to host the event

I almost didn’t recognize him. I used to see him host MTV back when I was a teenager. Man, he aged. Shit it means I have aged too. FML. But he is still as hot as evar though.

The first model to step out is our racing king Alex Yoong. I have never seen him race, but I seen more of him in adverts and runways. Heh.

Linora from Red FM was also there. I shamelessly shared their table, lol. She was there to support her friend, Dennis Lau.

Tammy and her friends

I met Tammy there with her friends. We were all very excited cuz we are the first few to shop at Uniqlo that night.

Heh.. it’s funny how all the female models are in the entertainment industry while the male models are all successful individuals from every walk of life except for modeling.

However, I am sure you can find a female model that is both hot and successful in another kind of industry. No?

But when you have a proper model, the walk and the poses are definitely nicer in a photo.

All the big names are acknowledged as friends of Uniqlo.

Uniqlo is actually a subsidiary brand of Fast Retailing Co. and they are one of the top four apparel retailers in the world. Uniqlo focused on selling high quality casual wear and basics and already has more than 970 stores worldwide.

Their clothing is made to transcend differences in age, gender, occupation and ethnicity. They even have a bold tagline, “Changing clothes. Changing conventional wisdom. Change the world”.

With such strong names modeling for them, it isn’t surprising to learn that the next day, people were queuing up in front of the store anticipating the grand opening. Especially when they are giving away the One Piece tumbler and Cath Kidston Japanese fan while stocks last as store opening promotions.

Huge line up of celebrities on stage

The event started late but ended in just a matter of minutes. However, every minute of it were enjoyable.

Having fun at the event

After the catwalk, we were ushered to Uniqlo to shop together with the celebrities. It was interesting and lucky for us, since only people wearing the red band could enter the shop.

We were all given vouchers from GetYourCouponCodes to shop that night and everyone rushed to choose their favourite Uniqlo piece to own, it was definitely so worth it.

I of course, chose an One Piece t-shirt. I love One Piece and is now re-watching the Enies Lobby Arc, wearing this t-shirt and drinking from my One Piece tumbler. Hehe.

OMG! You are so lucky to get to attend the opening of UNIQLO!!!!

Would you like to come with me for the next one then? :p

really? can I? OMG! You are making me excited!

yeap.. will email you for the next one. 🙂

now you have 2 pieces of same 1 piece tshirt! 😀

Hie, out of curiosity, how did you score invites to the uniqlo opening? (: